The phrase The Beholder’s Share describes how personal past experience shapes our experience of art, whether that be enjoyment, bewilderment, disgust or boredom.

The idea that a viewer brings personal meanings to a work, that the brain indeed finishes the work and that this interplay makes all art a collaboration between artist and audience seems akin to life itself -between ourselves, others and the environment. The layered and detailed imagery here, of insects, seagrass, feathers and more, speaks to the earth’s lush environmental diversity and is contrasted with data on land, air and water quality, rising sea temperatures, oil spills, bones and viruses.

Using the interactive, sculptural fortune-teller game structure to present silk textiles embellished with ideas around choice vs chance regarding our natural world and its current threats struck me as appropriate given our lives are a selection of both intentional and random events that we physically and emotionally participate in and assign meaning to as we move forward. Today, neuroscience shows how our experiences actually shape our perceptions, as the brain uses the past to make sense of the outside world. This can be either a benefit or a liability depending on our personal history and drives home that adaptability and perspective, not might, is in fact the desirable trait when we speak of Darwin's often misunderstood & "survival of the fittest”.

All the work in the gallery is wax resist on silk (3-D folded sculptures) or paper (2-D), using acid dye. Roketsuzome or “Bokashi” is the Japanese batik-like technique more specifically used. The work is comprised of many layers of printing, dye and wax work. In the case of the sculptural pieces, both machine and hand embroidery are used as well as applique and drawing, screen printing and stenciling. Text both embroidered and screenprinted is taken from Yeats poem “ The second coming” written during the Spanish flu pandemic over 100 years ago and is counterbalanced by excerpts from Rumi.

Thanks especially goes to a host of friends who worked collaboratively with me on the hand
embroidery for which I am grateful! 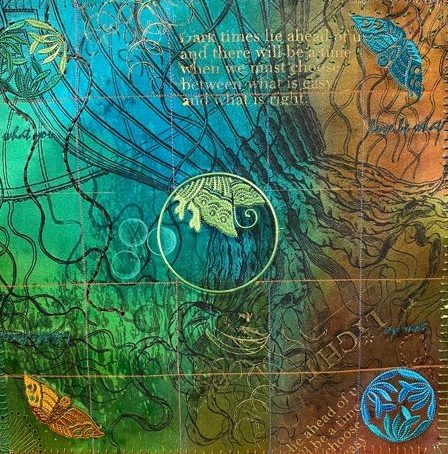 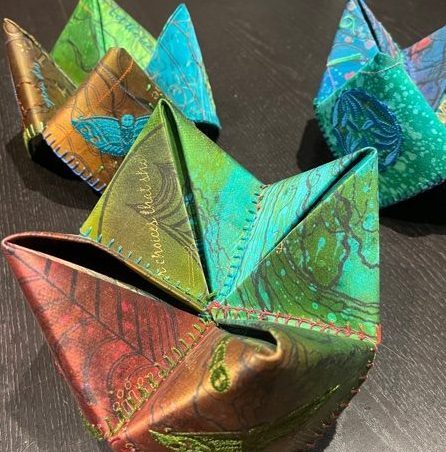 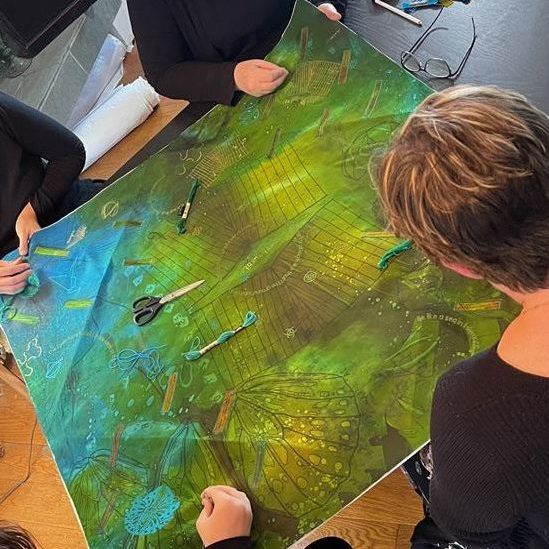 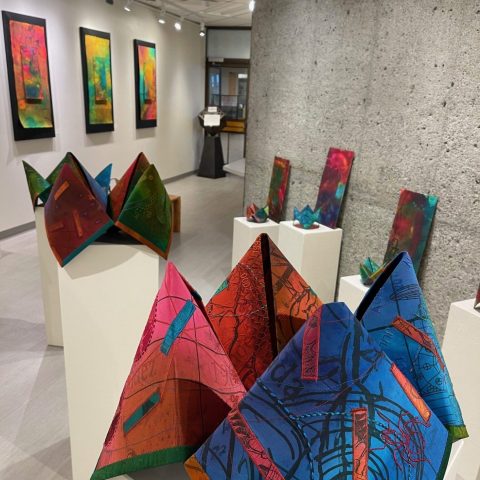 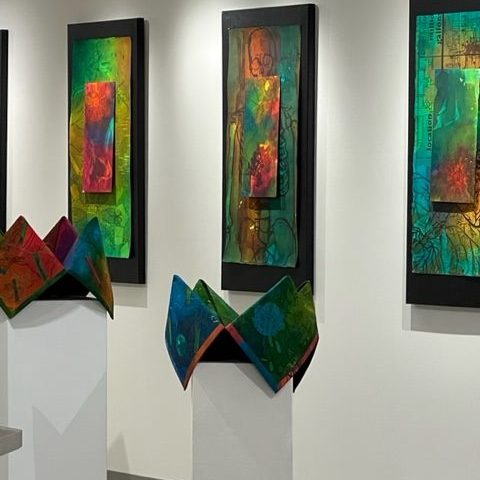 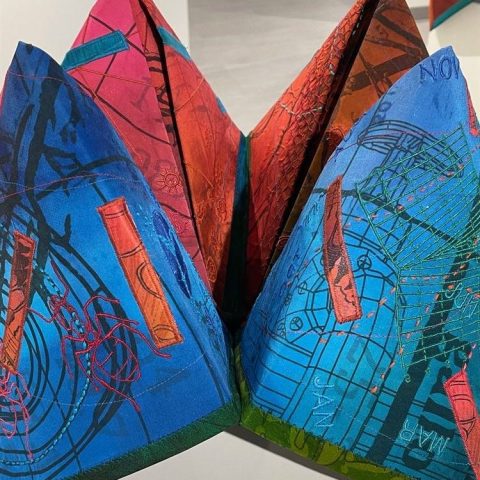 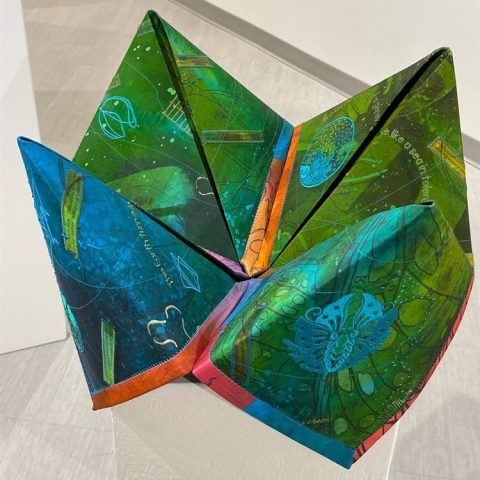 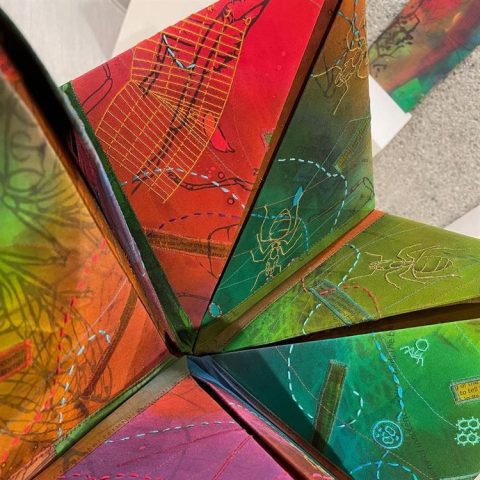 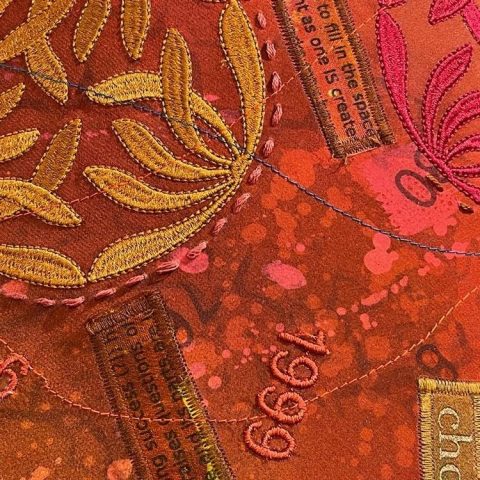 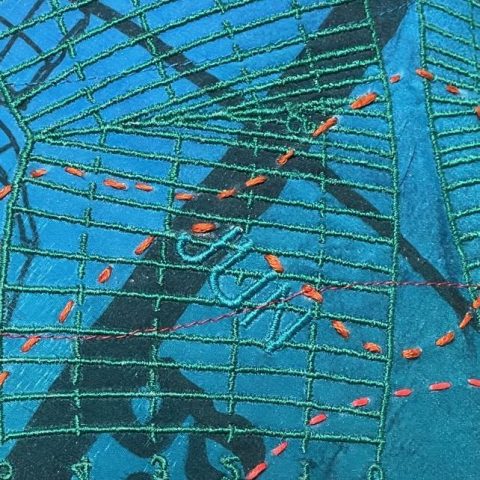 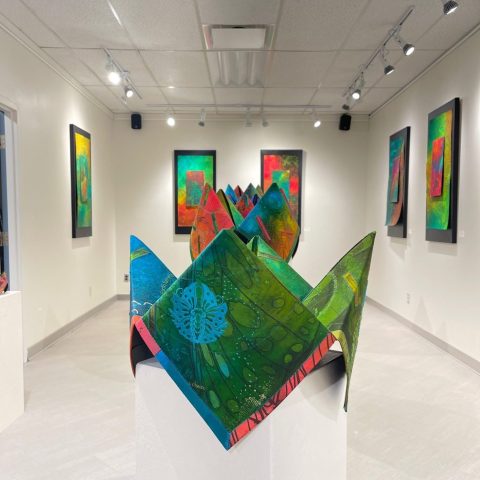 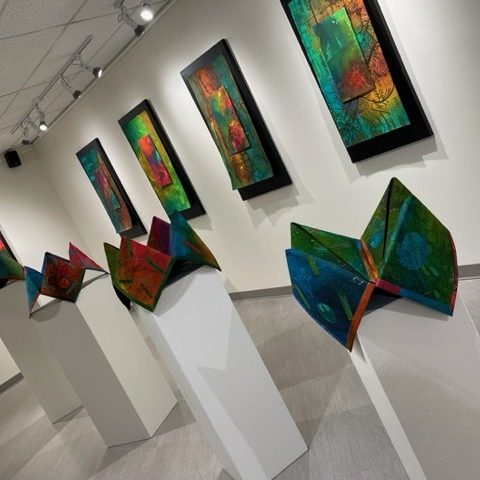 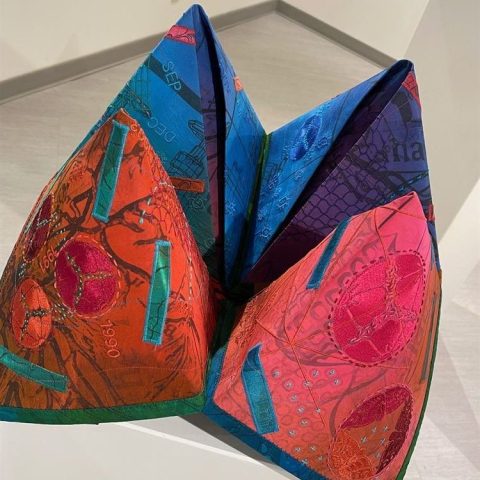 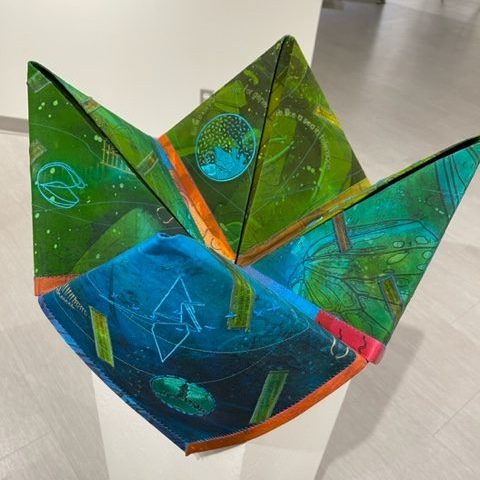 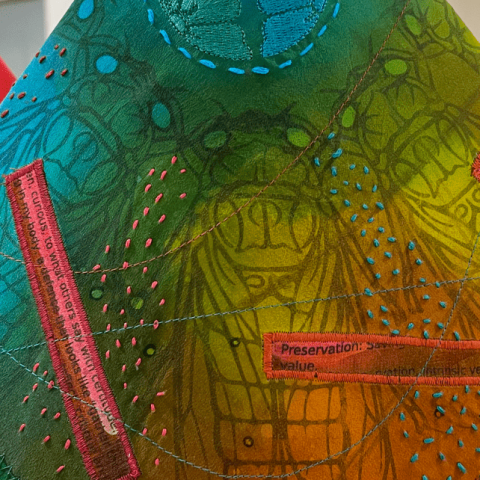 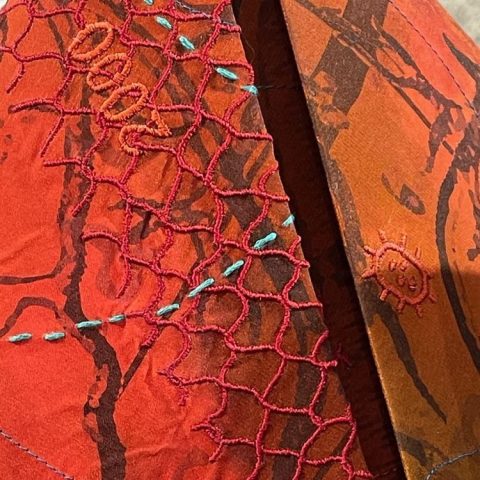 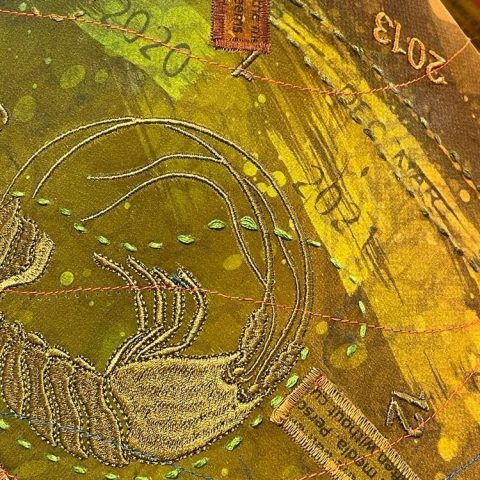 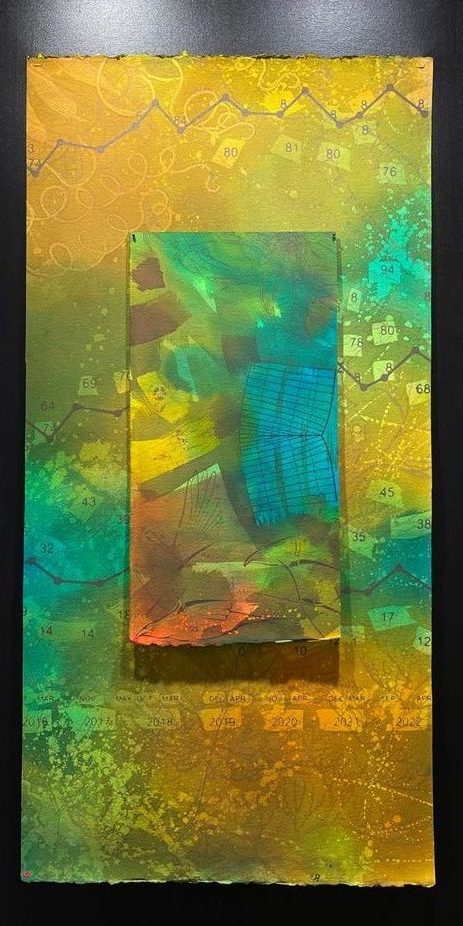 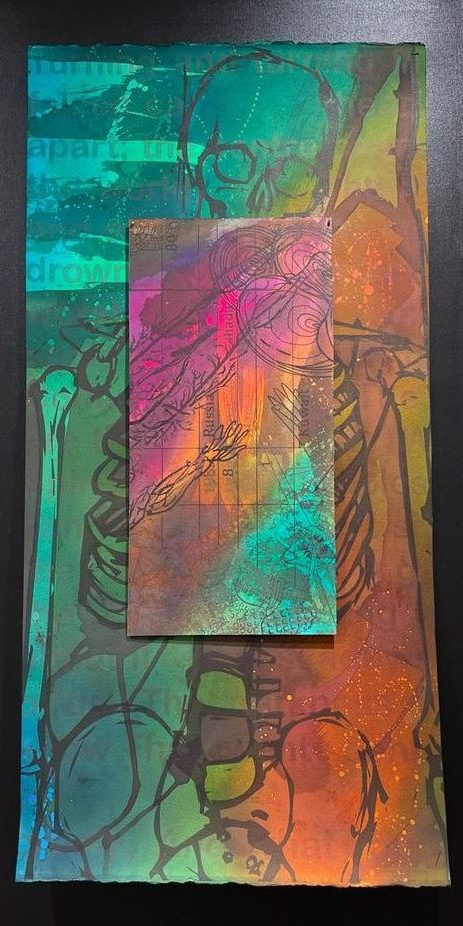 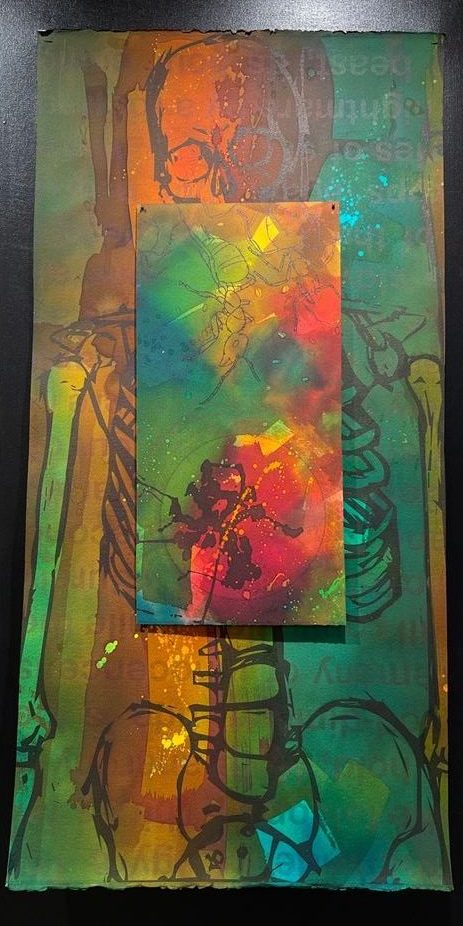 Doomscrolling slouching towards quietus
or doom-scroll·ing

Noun Digital Technology. Verb to scroll or surf the internet

The practice of obsessively checking online news for updates, especially on social media feeds, with the expectation that the news will be bad, such that the feeling of dread from this negative expectation fuels a compulsion to continue looking for updates in a self-perpetuating cycle and the inability to step back and disengage.

slouching towards quietus - dedicated to only seeing the worst of things, passing joy on our way to despair

Over the last year I definitely Doomscrolled.

Einstein’s definition of insanity - doing the same thing over and over yet expecting a different result. Especially when afraid, we search for that different result endlessly, sometimes minute to minute and often, passing joy on our way to despair.

Joan Didion’s book Slouching towards Bethlehem was written in 1967 the year I was born and is a somewhat dark social commentary full of observant detail. The title always fascinated me as it is taken from and led me back to the Yeats poem “The Second Coming” his most widely quoted work. Written in 1919 soon after the end of World War I and the Spanish Flu pandemic, both catastrophes that killed millions of people, it is unsurprising then that the poem paints a bleak picture. It  is also dark as it predicts that time is up for humanity, and that life as we know it is about to be undone, suggesting that civilization’s sense of progress and order is only an illusion in a world where people have distanced themselves from nature… in reality and also, from themselves, as we are nature.

This textile work has served as an exercise, a practice, over the last year of isolation, to find historical links in literature to our current pandemic experience while gathering credible current information and making sensible decisions that considered group wellbeing. Through it all, reminding myself what gives me pleasure and peace, I realized, was important to building personal resileince. In their very making I’ve taken my vague and fuzzy conceptual notions, explored, sharpened and given them contour in my mind, then physical form. This process of working through “what do I think and what has transpired historically that influences my thoughts?” taking place in the making ,is not always a comfortable journey but hopefully, in the end, yields a clearer and more nuanced perspective. Transforming these thoughts into into visuals through a crucible of creativity, is always a pleasure. To this end, in revisiting both Yeats and Didion recently and finding those historical connections to our present- day situation, certain poignant lines in the text cemented themselves in my mind. Along with poetry from Rumi the 13th-century Persian poet and Sufi mystic, ongoing themes of nature co existing alongside technology, these all together formed the conceptual framework.

The idea of taking the verb Doomscrolling and transforming it into these personal (doom)scrolls, was intriguing to me. The 8 'nouns' you see here differ greatly from the verb. In the end these pieces are about a balance. Data IS there on the back, the endless stream of bad news text forms the back of the wall hangings. The negative terminology is in bold but is punctuated by, as part of the antidote, ghostly white Rumi poetry which is carried onto the front by way of embroidery to join the semi abstract flora and fauna imagery full of color light and sensual detail. The intention is in highlighting the powerful idea of agency in deciding mindfully where one puts their attention to sustain themselves.

"a willingness to accept responsibility for one's own life and thoughts, the source from which self-respect springs.” And of course, “not passing joy on the way to despair”.  Both Joan Didion quotes.

Nature presented here is likely more akin to the truth in that the scale has changed - we as viewers are smaller than our usual relationship with the creatures and blooms.

The colors began, in fact, as thoughts around polarized politics. Left and right, black and white evolved into warm and cool, then gold and grey continuing on into the idea of glowing warmth through fog generally.

Details through the headlines.

People often remark my textile work reminds them of Asia, or more specifically, Japan which is interesting, and observant given I lived in Japan for a long period of time. Likely it is the large  scroll- like format as well as some of the subtle imagery and motifs I utilize. The textile techniques and some of the motifs I employ are gathered from my time living abroad studying Japanese kimono and S.E Asian weaving. They are a global hybrid of techniques, materials, motifs and imagery both historical and modern. This current body of work is done on linen, screen printed, hand dyed, cut and re pieced, appliqued and embroidered both by hand and machine. Hours of meditative hand embroidery and embellishment took place, winter 2021. In addition, near the completion, I draw into the work with pencil crayon, shading for subtle detail and coloring. Occasionally in these pieces, bamboo details are stitched in, suggesting kelp, knots, ladders or repair. Floating detail along with the appliqued directional marks describing another floating layer, movement and passage of time.

One of the biggest challenges always as an artist is to successfully marry the idea with the image in order to resonate and generate curiosity in the viewer. I hope you find the work both intriguing conceptually and aesthetically and find some unexpected details of pleasure, along the way.

The concept, the physical creation of my own version of Doomscrolls, warmth and intimate detail of the pieces themselves were all part of my antidote to the last year when finding myself in a new environment of isolation. 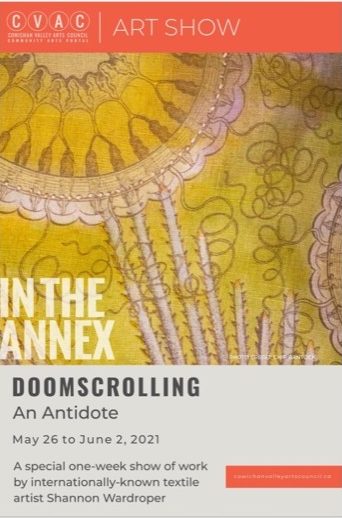 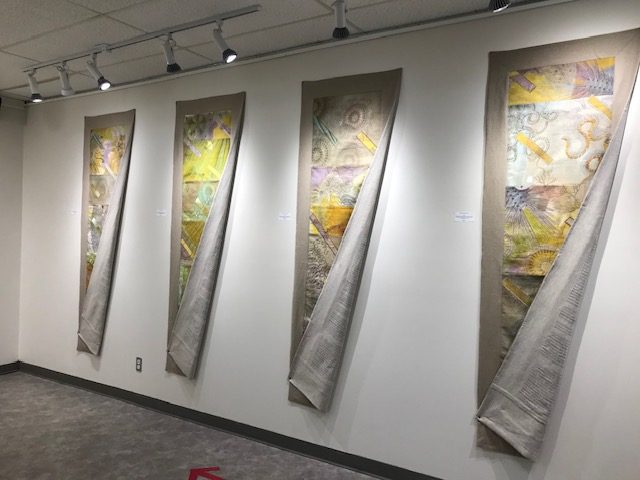 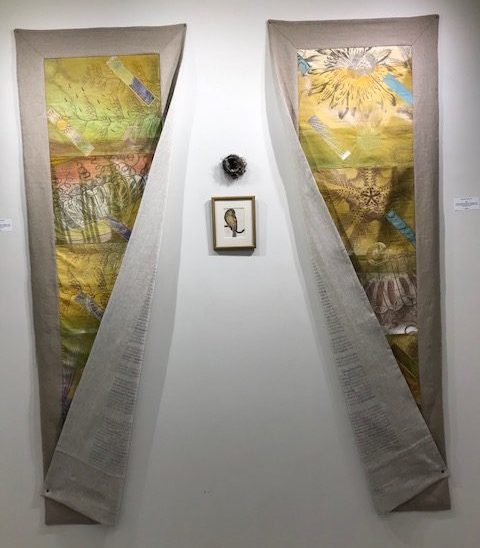 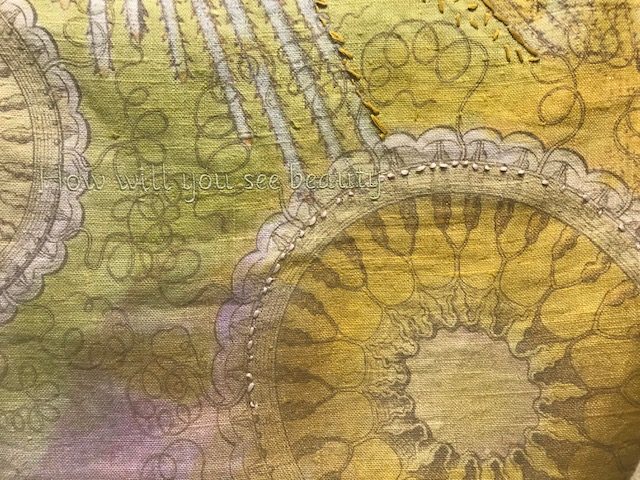 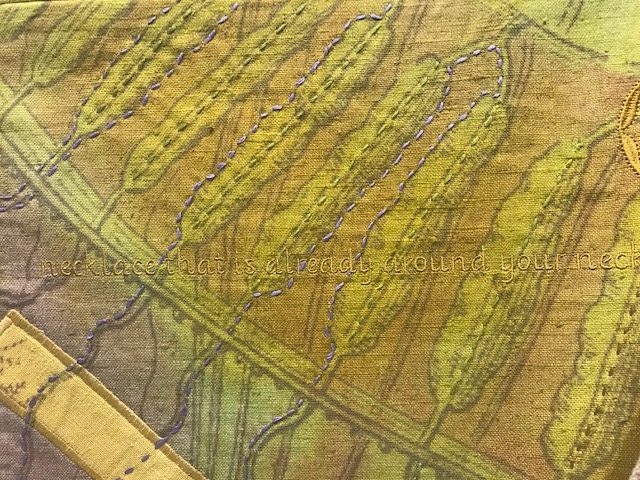 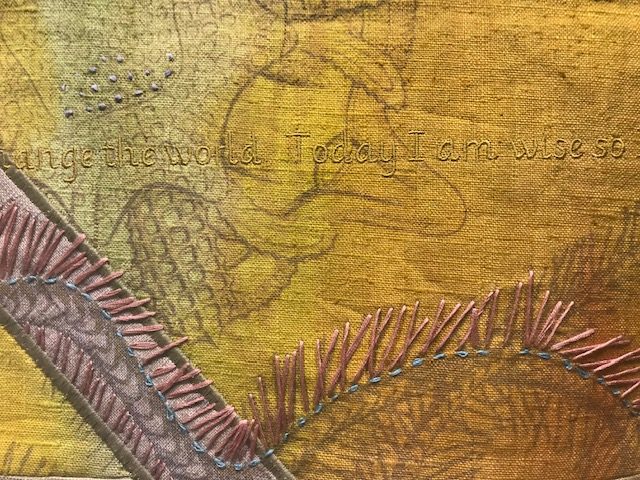 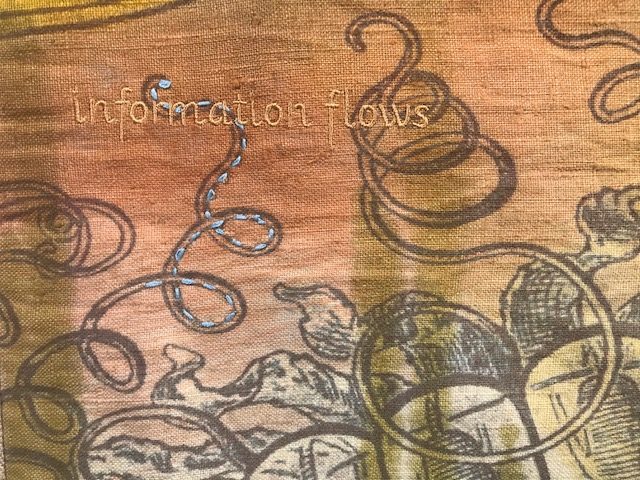